As the number of videos released on the internet continues to rise at an exponential rate, content creators — both professional and amateur — must do more to distinguish themselves from the competition. No matter how excellent your camera is, shaky, handheld video footage isn’t going to make it for today’s audiences, no matter how talented your crew is.

Therefore, if you plan on shooting 4K video with a mirrorless camera or DSLR, you need to invest in a decent stabilizer to assist your movies to appear smooth and professional in appearance. In our Zhiyun Crane 2 review, we’ll take a look at the enhancements and additions made over the Zhiyun Crane V2 that we previously evaluated, as well as explain why we believe the Crane 2 is a great tool for bridging the gap between amateur and professional filmmakers alike.

While the similar titles of the Crane 2 and Crane V2 may be a bit confusing, the Crane 2 is a radically different machine from its Crane forebears. In terms of size and weight, the Crane 2 is significantly larger than the Crane, with a larger mounting platform, longer arms, and a thicker grip. Physically, the variations between the first and second versions of the original Crane were negligible when compared to one another. 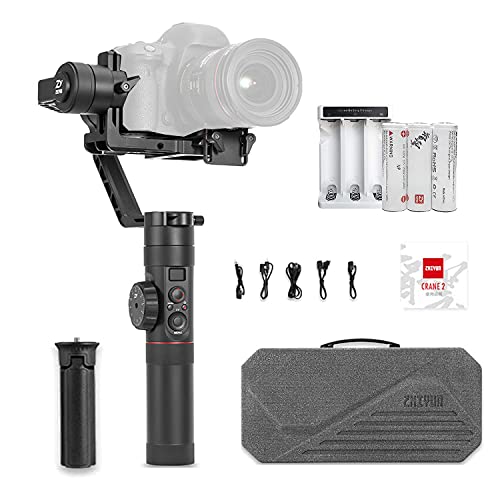 A standard quick release (QR) plate, which is compatible with commonly used Manfrotto QR systems, has been added to the mounting platform, allowing users to shift the camera between the stabilizer and tripod fast and simple, without having to re-balance the stabilizer each time. The Crane 2 has a maximum payload of seven pounds, which is rough twice as much as the Crane V2’s maximum capacity. As a result, not only is it capable of supporting hefty DSLRs such as the three-pound Nikon D5, but you could also attach a heavy Nikkor wide-angle lens and still utilize the gimbal efficiently.

The first thing you’ll need to do is adjust the balance of your camera, and after approximately 30 seconds of tweaking, you’ll be ready to start taking pictures. The Crane 2 is equipped with a conventional Manfrotto tripod mount with a quick-release mechanism, which makes mounting and demounting the camera a snap. It’s a wonderful addition to include spring-loaded thumbscrews on the screws, which make it easy to tighten or loosen them even when your camera is in the way.

When you switch it on, there are just three modes to be concerned with: normal, high, and low. A number of options are available, including PF (Panning Follow), which follows your horizontal movement while keeping the camera perfectly still; L (Locked), which locks all axes and keeps the camera pointed in the direction you specify; and F (full follow), which tilts and pans the camera in response to your movement.

With a joystick, you can alter the tilt and rotation depending on the mode, and a dial, you can access the menu and camera settings if you have a camera that is compatible with the system (which you should) (Canon, for now). On the handle, you’ll also discover a follow focus wheel, which is currently only functional for Canon users.

Everyone appears to believe that Zhiyun is working on extending this capability to other systems, although it is more probable that this will be in the form of an aftermarket add-on rather than a software update.

Every component, save for the battery cage and a few knobs, is made of solid aluminum, including the small tripod that Zhiyun tossed in to allow you to balance the gimbal or capture static images on a level surface. It appears to be a very robust piece of equipment, which is reflected in the 1.25KG unit weight of the device (around 2.7lb). This is definitely not too heavy for most people, but if you’re using it for an hour or longer, your arms will get a good workout from it.

The fact that it is so large and heavy means that it is not the most convenient piece of equipment to transport. Zhiyun was clever enough to provide a soft-yet-durable carrying case that can accommodate the gimbal itself, as well as accessories, batteries, and all of the cords that came with it. It even includes a neck strap to help to carry it a little easier, but it’s still rather large.

I’ve been looking for a “go bag” to protect the gimbal when filming in a run-and-gun approach, but I haven’t been able to find anything that provides adequate protection while still allowing for quick access. According to my plans, I’ll probably have to create my own bag, which is something to bear in mind depending on your photographic style.

Contrary to popular belief, the Crane 2 is much more compact than DJI’s Ronin M and instead competes more closely with the Ronin S, which was unveiled at CES earlier this year. If you compare the Crane 2 to a glidecam or other professional-level stabilizers, it is a piece of cake to learn, handle, and use.

Gimbals provide the average person the opportunity to capture video that was previously only possible with a team of people. If you get a decent lens, you can achieve professional-looking results for a reasonable price, and you may have a lot of fun while doing so. The decision on whether or not you require a gimbal such as the Crane 2 is entirely up to you.

I purchased the Crane 2 for both works and play because I wanted more movement in my review footage without the shaky-cam appearance that I was getting with my previous camera. In addition, I’ve been intrigued by the prospect of making my own short films and learning more about filmmaking on my own schedule. Also, it should be mentioned that the gimbal is a really enjoyable gadget to operate.

When it comes to videography, gimbals are an excellent investment whether you’re a serious hobbyist, YouTuber, photographer, or if you’re working on a project that would benefit from the professional-looking film. That does not imply, however, that the Crane 2 is the only option available.

According to Crane 2, if you want a robust and powerful stabilizer that can support some of the heaviest cameras out today, such as the Canon 1DX Mark II and several RED movie cameras, the Crane 2 is the greatest value for your money at this time. The Crane 2 provides a variety of payload choices, including the ability to utilize large rigs, add mics or monitors, and use full-frame fast glass.

However, that potential is not required by everyone. It is worth noting that the Crane 1 v2 and the recently released Crane Plus are less expensive and have smaller payloads, but they are powered by the same Zhiyun magic that drives the Crane 2. The Moza AirCross and the Feiyu A2000 are two additional excellent lightweight stabilizers from up-and-coming manufacturers to take into consideration.